From the trauma of the Great War came the promise that led to our Veterans Memorial Building.

It was called the “War to End All Wars.” We now know it was World War I. With war in Europe (1914-1918), in an effort to acknowledge the sacrifices the war imposed, the U.S. government made a promise to its “doughboy” soldiers that they could have “anything they wanted” upon their return home. Many didn’t return from Europe alive, but those who did were renewed in their determination to live the American Dream for themselves, their families and their community. They needed a “place” that could provide for their many needs, where they could find support for one another and where their lost comrades could be remembered and honored over the indefinite future.

To fulfill the earlier promise, the federal government made money available to local counties which, in turn, committed the funds necessary to build a Veterans Memorial Building in each town that had an American Legion Post. Local veterans had formed American Legion Post 246, and its charter was issued on January 24, 1921.

Carrying out the earlier promise, in 1924 the Contra Costa County Board of Supervisors awarded a construction contract for $18,000. The building was dedicated on April 2, 1925. (see S. F. Chronicle article)

On the threshold of each building was a brass plate reading “Dedicated to those who served.”

In the early years, the building was commonly known as the “Legion Hall.” Veterans’ activities were the focus from the start, but it became a center for gatherings for the entire community. In 1926, the Danville library moved into the building and was “a joy to the whole community.” See News Notes of California Libraries article. The library
was finally closed in 1961.

Saturday night dances sponsored by the American Legion and Woman’s Auxiliary were popular for many years. (see 1941 Walnut Kernel article) 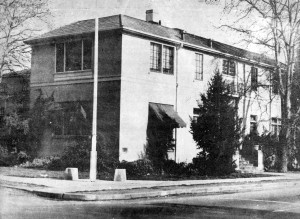 In the early 1970’s, a Senior Citizens’ Club was organized. It grew quickly, and was welcomed into the Veterans building. This led to the need for a major renovation effort completed in 1978 that included an upgraded kitchen, new lounge, plumbing and electrical upgrades and exterior paint. (see article on Senior Citizen’s Club)

Over time, the iconic structure was showing signs of reaching the end of its useful life. 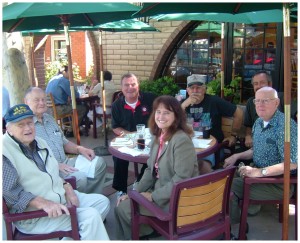 A small group of local Veterans and community members had been meeting for coffee regularly. The need for an improved (or relocated) facility became a prominent topic of discussion. Tony Carnemolla was the prime mover. Significantly, the Town of Danville was interested in an enlarged, downtown community event venue and having a dedicated facility for senior’s activities and programs. The prime property in the center of town was the obvious solution. A unique partnership was formed between the Town and the Veterans. The building ownership was transferred from the County to the Town of Danville to be held in trust for the Veterans.

After extensive input to assure a design that satisfied the needs of the Veteran’s groups, the Town and the seniors, an architectural plan was agreed upon. The Veteran’s groups committed to conduct a capital campaign to raise funds in support of the project.

On May 1, 2010 “The Last Hurrah” was a fitting and grand finale to the proud and grand history of the Legion Hall as the last event before the much anticipated facelift. See The Last Hurrah for live history interviews of local residents and veterans recalling the building’s past

In early July, 2010 construction commenced to renovate and expand the facility. 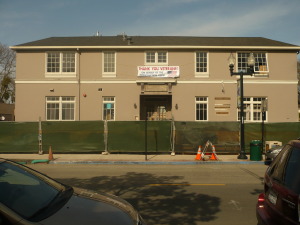 Dedication of the beautifully completed renovation and expansion was celebrated by the entire community on April 28, 2012.